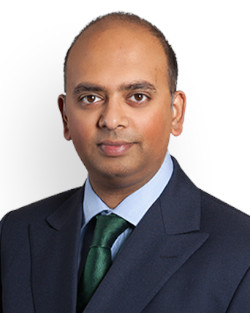 Pritesh Rathod is a sought after barrister who specializes in the fields of clinical negligence and personal injury. He regularly appears in the High Court and County Courts in a wide range of hearings, with a particular strength in trials and appeals. He represents both claimants and defendants. Recognised by Chambers & Partners as an up and comer at the bar.

Inquests also feature heavily in his practice, where he acts for families, NHS Trusts and individual doctors.

Pritesh has experience in professional discipline cases and is keen to maintain a broad practice, he accepts instructions across a wide spectrum of common law areas.

Pritesh’s main area of practice is clinical negligence. He represents both claimants and defendants. His experience ranges from low value claims to multi-million pound claims and across the full range of medical specialisms. He has a significant amount of courtroom experience, appearing in applications, trials and appeals. He has successfully appeared in the Court of Appeal, having obtained a strike out in a case where it was alleged that the Claimant had received full compensation for her claim in previous proceedings. He also successfully appeared in an appeal relating to the use of employment experts in a brain injury claim. Pritesh has a special interest in quantum issues and is particularly proficient at drafting schedules and counter-schedules. He also has an interest in fatal accident claims.

Pritesh is regularly asked to deliver lectures and seminars on topical issues within the field of clinical negligence.